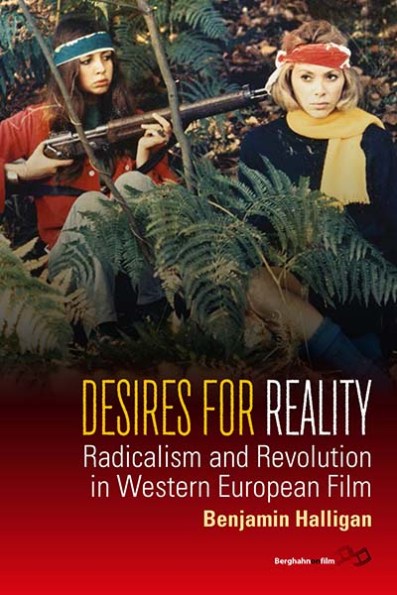 “Desires for Reality addresses a long-overlooked aspect of film culture in a manner that is both subtle and probing. Halligan analyzes theory and practice in a lucid and persuasive manner, connecting film culture not only to politics but also other art forms such as music and the plastic arts. I know of no other work that covers the same territory from this perspective, which offers a paradigm shift in the manner that we as scholars might think and write about this era.” · Catherine Wheatley, King’s College London

“Halligan’s reading of 1960s European cinema history is compelling and intricate. He moves beyond pre-existing scholarly categories and offers a new approach to these films, introducing them to unlikely company and providing fresh ways of looking at them. This book has the potential to reinvigorate debates about film history, revolutionary culture, realism and modernism, and a variety of other topics.” · Catherine Fowler, University of Otago

My 2016 book concerns Western European film, as allied to protest – around the “Summer of Love” of 1967, and then the “events” of 1968. The book ends with a consideration of film-making as a forum for the regrouping of radical sensibilities, and laboratory for the development of new strategies of political film-making. This latter phase occurred in the immediate aftermath of the failure of the seemingly revolutionary upheavals of that time.

Desires for Reality takes in a number of well-known films and film-makers. Some – such as Jean-Luc Godard’s Weekend, Michelangelo Antonioni’s Blow-Up and Lindsay Anderson’s If… – are now canonical films: must-see “classics” you can expect to find on Film Studies courses and in the collections of film fans. But some of the films from this period are, I discovered, effectively orphans: films that seem to belong to no-one, have had little or no circulation life after 1968, and so are mostly unseen, or are so difficult a viewing experience that no-one, even now, would want to adopt them. Prints have been rare and ragged.  Some of these films have been lost, or banned, and then belatedly rediscovered and reappraised. Some were only ever shown to striking workers during factory sit-ins, or students occupying their universities. Some were made to accompany LSD trips, and for screenings at happenings, or in nightclubs. Such lost films tended to turn up as curios – grey market bootlegs, or found deep in the archives of media institutes, or circulated among fans as, say, they contained a rare Pink Floyd song on their soundtrack, or as the last screening on a film festival programme day, pushing those cinéphiles still remaining way into the small hours. Sometimes these unseen rarities are so contemporary and innovative – and I’m thinking here of my times at the I Mille Occhi film festival in Trieste – that you wake up the next day wondering whether the film was in fact just a figment of a dream. And many of these films have been disowned by their parents too: the embarrassment in the filmographies of acclaimed European auteurs who have since distanced themselves from the polemical and militant nature of their 1968 film-making. Others have appeared almost out the blue, with little indication of where they came from, or who made them. And some films deserve wider circulation – in a way, their time is only really now (… I’m thinking of the films of the great German auteur Werner Schroeter: deeply idiosyncratic, wildly romantic, and audaciously experimental. Or the bohemian films of the Zanzibar Group. Or the immersion in madness found in the work of Jacques Barateir).

In considering my approach to addressing and expanding a canon of 1968 cinema, it became apparent that I needed to consider these more “difficult” films on their own merits. Or, put another way: to see in the films their own conception of themselves, and how they posited themselves as fitting into the revolutionary struggle on the streets. Only that way could I begin to be able to make sense of their challenges, and to move closer to a sympathetic reading of the films as, I think, first intended. To do this, I needed to borrow the eyes of the film-goers of their times. I didn’t want the 20/20 vision of hindsight, or rose-tinted glasses, or to hear, at least for the duration of the film, that the 1968 view they espoused was only partially sighted. Rather, I welcomed any such failings or “mistakes” as creative and generative – and particularly around the application of theories derived from or associated with, or misread in the writings of, Marx and Lenin, Brecht and Debord, Marcuse and Wilhelm Reich, and even Che Guevara, Mao and 1968 graffiti slogans. I wanted to watch the films in good faith, so as to take seriously Alain Badiou’s 2010 gambit (from The Communist Hypothesis) that “We are still the contemporaries of May ’68”. And, in looking back to a moment of protest and radical refusal, of utopian aspirations and revolutionary fervour, for which sexual, political and civil upheavals all synchronised, it’s not surprising that there was some vagueness as to ideas, and some slippage between the gestural or symbolic and the actual, particularly in relation to the debate on responses to state violence.

Consequently, I needed to resist the temptation to historicise the period. This seemed like a paradoxical impulse for a book that is, after all, a critical film history. And there were plenty of temptations to look to aspects of discussions about rethinking the meanings of 1968, and then reading 1968 in their light – especially those ideas, such as Autonomist Marxism, that have very substantially determined the work of theorists and thinkers with whom I’ve engaged elsewhere. One of the hardest temptations to resist came in the form of more recent films on 1968 from two film-makers who feature heavily in this book. Bernardo Bertolucci’s Partner (1968) very much conforms to the orphan model above, and Bertolucci has said little positive about the film subsequently. His later film about Paris in 1968, The Dreamers,was released in 2003. And Philippe Garrel, whose work with the Zanzibar Group made for a central consideration of the attempts to draw on Artaudian theory for revolutionary purposes in the midst of 1968, also made a film concerning the Parisian hippy subculture around the streets of 1968, Les amant réguliers (Regular Lovers), which was released in 2005.

Bertolucci’s The Dreamers ends with a riot police charge towards protesters, and with little uncertainty as to what would then ensue for the protestors. Two of the protagonists of the film, seconds before the charge, argue about whether a lit Molotov cocktail should be thrown at the massed forces of state. One sees the makeshift weapon as “fascism in a bottle”, and its use counterproductively mirroring state violence with revolutionary violence, while the other sees it as the first inspiring blow against the armed oppressors. Just such a discussion occurs in Partner too, among the university students of 1968 in Rome, but with a variety of ambiguous answers suggested. Bertolucci’s return to these 1968 discussions in 2003 seemed quite apposite: 2003 was a moment of renewed protest across Europe – anti-globalisation and anti-capitalist activism, and the enormous, global protests against the imminent Iraqi war on 15 February, since declared to have been the largest demonstrations in history. Opium takes the emblematic role of Bertolucci’s Molotov cocktail for Les amant réguliers. As with Garrel’s Marie pour mémoire (Marie for Memory) of 1967, or Le Lit de la vierge (The Virgin’s Bed) of 1969, the dispossessed hippies seem in a trance, otherworldly, and only marginally registering the chaos of the protests outside their crash pads. Garrel’s concern, in 1969 and 2005, remained the question of alternative lifestyles, the “radical refusal” possible from dropping out, but also of existing in a physical state that removes you from the coordinates of capitalist labour. Such marginal figures, remembered decades later, are associated in Les amant réguliers with comets: illuminating signs of wonder, burning brightly but briefly, perhaps showing the way.

The Dreamers ends suddenly at this point of divergence of opinion: the answer to this debate, therefore, is left with us. And Desires for Reality ends at the point of the beginnings of a post-1968 recalibration of an understanding of cultural intervention into the political sphere, for the 1970s. That is, my critical history ends at the point of the first set of new questions raised, post-1968, and the early intimations of new answers. Now that the book is complete, and part of Berghahn’s publication list, I hope that my approach – a sympathetic methodology, and one that seeks to recover lost cultural artefacts and throw new light on some countercultural classics – has added something to the discourse, and nature, of looking back at 1968. As any good cinematographer will tell you: it’s not just what you’re looking at – it’s how you’re looking at it too.

My first book, pretty much written in my twenties, and published by Manchester University Press in 2003 (second edition, 2012). It’s a critical biography that also involved my piecing the story of Reeves’s life together through a lot of interviews, and a lot of document sifting. But I got to talk to characters such as Christopher Lee, Tony Tenser, Philip Waddilove, Paul Mazursky, Iain Sinclair, Ken Russell, Hilary Dwyer, Stanley Long, Michael Armstrong, Patrick Curtis…

I’ve been able to talk about this book, and introduce The Sorcerers and Witchfinder General, from the Southbank Centre in London to I Mille Occhi in Trieste, and many points inbetween, and hope to keep doing so. I’ve done DVD commentaries for Reeves’s films too, and my DVD booklet notes for Castle of the Living Dead are under the “Film Studies Writing” section of this website. 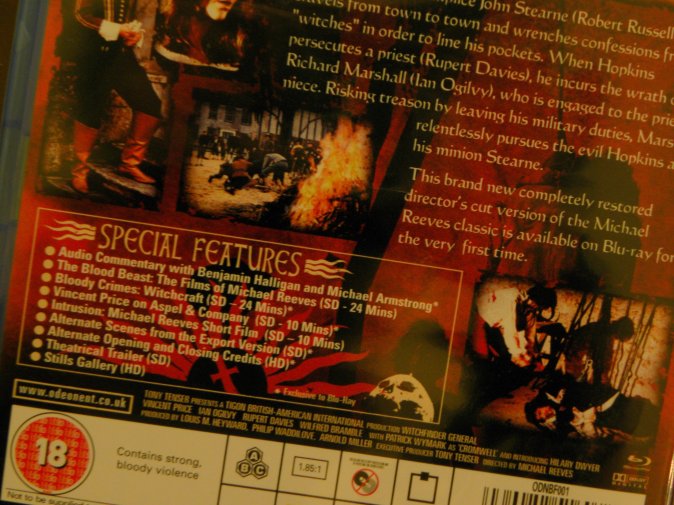 In 2019, I was Technical Consultant, and on-screen participant (and a lot of off-screen voice) for the feature-length documentary The Magnificent Obsession of Michael Reeves, directed by Dima Ballin. It was at Frightfest and also Abertoir in 2019, and here’s my introduction to the latter screening:

and conversation and Q&A afterwards:

And here’s me on the Britflicks podcast in 2020, talking about Reeves too: https://m.soundcloud.com/stuart-wright-3/5-great-nichael-reeves-moments-in-film-with-ben-halligan?in=stuart-wright-3/sets/5-great-british-horror-films