Reflections on The Vagina Monologues in respect to teaching, activism, and tensions between Second and Third Wave feminisms — SlutWalk protests, undergraduate encounter groups, sexting and girls gone wild, the legacy of 1970s consciousness-raising, Girl Power at the barricades, the shifts from feminist tract to feminist self-help manual. Includes my images from Manchester Slutwalk activism.

Thanks to Jodi Dean, then editor of the journal, who immediately asked for this piece when I first talked about my vague intentions to write it.

First academic writing on Miley Cyrus, in the context of exploring the challenges of achieving a sense of intimacy in the arena concert — Hannah Montana via Ziggy Stardust, the “kiss-cam” vs Section 28, Miley’s Messianic aspirations vs Peter Gabriel’s Anti-Apartheid anthems, twerking, MTV eugenics through Debbie Gibson and Tiffany, Terry Richardson’s stretched tongues, and the arena concert as social media transmitter. Includes my images of the Miley Cyrus Bangerz tour. The chapter is from my co-edited book The Arena Concert, which also includes an interview with one of the designers of the tour.

Audio of me talking about arena concerts at the Brighton IASPM-UK conference: https://clyp.it/afzsxw2j

“My Uterus Doesn’t Expel Rape Sperm”: SlutWalk and the Activist Legacy of the Suffragettes

Started life as a portfolio of my photographs for the book Suffragette Legacy but morphed into a consideration of Third Wave feminism and activism, the sudden appearance and disappearance of SlutWalk, Manchester Suffragette hauntology, establishing Temporary Autonomous Zones, empowerment as intervention in recollections of the event, the impact of slogans.

(left: event from which the book was drawn)

Some images from the portfolio: Manchester SlutWalk, June 2011 (click to enlarge): 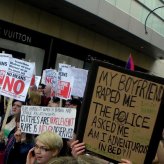 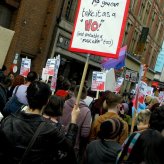