Use/Abuse/Everyone/Everything: A Dialogue on LA Plays Itself

It was only after publication that I discovered an unlikely connection between Halsted and the subject of my 2003 Manchester University Press monograph, the British horror film-maker Michael Reeves. Rumour had it that Halstead worked as a “gardener” for Vincent Price in the early 1970s — this would have been once Price had returned to the US, shortly after the unhappy experience of shooting Witchfinder General with Reeves. Halsted (who later worked as a gay prostitute full-time) seems to have made up for Reeves’s failings. All three have since died (Mike from an accidental overdose in 1969, Fred from an intentional overdose in 1989, Vinnie from lung cancer in 1993 – after years spent claiming Mike committed suicide), so we’ll probably never know.

Laura and I intended to write a companion piece on early lesbian pornography of the same period – some of which is mentioned briefly in Amos Vogel’s seminal book on avant-garde cinema, and seems to have been made as educational material. But much of this material remains way beyond reach, so we await its re-emergence. 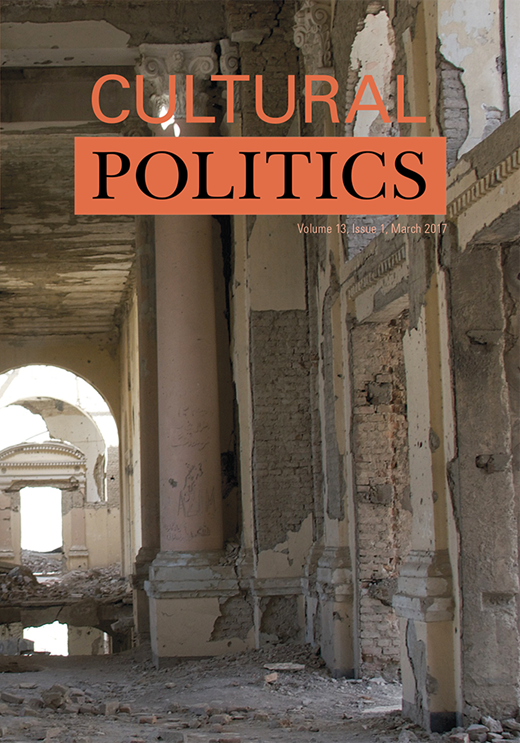 This is the first ever academic article on Richardson, whose work I’d started to seriously consider when I was writing about Miley Cyrus (who used Richardson to help sully her Disney starlet image). My concern is more with using Richardson’s work to explore ideas of immaterial and affective labour, particularly in the context of Third Wave feminism, and drawing on Hardt and Negri, and a legacy of feminist thought about the sexualisation of labour. However, this article was published only a couple of months before the Weinstein revelations, and the #MeToo campaign. I suspect that, had I not slipped in just in time, this article would not have found a home: it would have been deemed too hot to handle, by dint of its subject matter. Papers I’ve presented on this article have been prefaced by warnings for the poor audiences — either requested from myself, or delivered by others. I had to prepare two PowerPoint presentations, and ask for a vote on which to use: censored or uncensored.

“The article is still not a referee article. It still has no set of questions, no methodology, no argument … The first seven pages of the manuscript are on a very general level, discussing seemingly randomly chosen other photographers in relation to Richardson without really explaining their work or the relationship with them and Richardson.”

“As it stands, the essay is not an academic article. It does not have a clear structure, a set of questions or arguments, or conclusions. It does not contextualize itself to the existing theoretical/empirical work on affective labor. As it stands, the essay is a collection of thoughts or an analysis that certain photographs by Richardson and ideas that they have evoked in the author. In its format, the essay is more like a student essay than an academic, argumentative journal article. The author needs to restructure the article and make a clear argument, followed by analysis and conclusion(s).”

Here’s an update: no such obscurity was granted — Porn Studies was caught up the “Sokal Squared” affair in 2018: the journal requesting a “revise and resubmit” for a hoax article that should have been dismissed outright had the peer reviewers been competent and the editors doing their job. Peer review feedback included “I appreciate your dedication/contribution to the field”, “the authors should be supported in this project” and the amendments now needed to make for a “great article”. It’s a shame; the journal has brought its field into disrepute, and damaged the standing of the articles they have published — many of which evidence an awful lot of work.

This was an extended critical definition for the three-volume Encyclopaedia of Consumer Culture, but I was feeling my way along here as (in 2011 at least), there seemed to be next to nothing academic out there — but a fair amount of tabloid and broadsheet comment. Consumer culture seemed to be the correct framing however: was this just a conceit of those wishing to break into new demographics with grooming products (etc)? Either way, the idea touched on gender fluidity (well, in one direction only: masculine to feminine), and notions of class and labour and aspiration, all of which are within my academic interest. As soon as it was published I received a template letter, nominally from the editor of the Wiley-Blackwell Encyclopedia of Consumption and Consumer Studies, which began “Dear Dr. [hand-written:] Halligan — [typed:] As an internationally acknowledged expert on [hand-written:] metrosexuality, [typed:] it is my pleasure to offer you a contract to…”. How could I say no to such an opening line?

From Countercultures to Suburban Cultures: Frank Zappa After 1968

This isn’t one for my section of writing about music since my main concern is Zappa’s difficult relationship with free sexual expression in the 1970s, changing sexual mores and new sexual subcultures (particularly gay/queer) after the era of the freaks. I argue that Zappa watched the radical impulses of 1968 spread and dissipate into the suburbs, a process of recalibrating the swinging society into something much more conformist, at the dawn of the Reagan era. Ultimately, this phenomenon undid the great Baltimore satirist.

This began life as a piece on Zappa’s guitar playing (since I’ve long loved his freeform, fusion style), was for a while with a book exclusively on Zappa (until I ran out of patience with editorial requests, which were taking longer than I’d spent writing the actual thing), and wound up with the great, late Sheila Whiteley, for one of last few books in a long, illustrious, pathbreaking career. Sheila and I worked together again after this – me for her Oxford Handbook of Music and Virtuality, and she for my co-edited collection Resonances – and became friends. She joined the final panel for my co-convened conference on noise too, after delivering a paper on Hendrix at Woodstook, talking with our guests Stephen Lawrie (of The Telescopes) and Stuart Braithwaite (of Mogwai). Sheila was central to that renaissance of research around music and visual culture in the University of Salford and that resulted in (embarrassingly / hilariously) guest speakers so wary our reputation and fecundity that they arrived with trepidation. 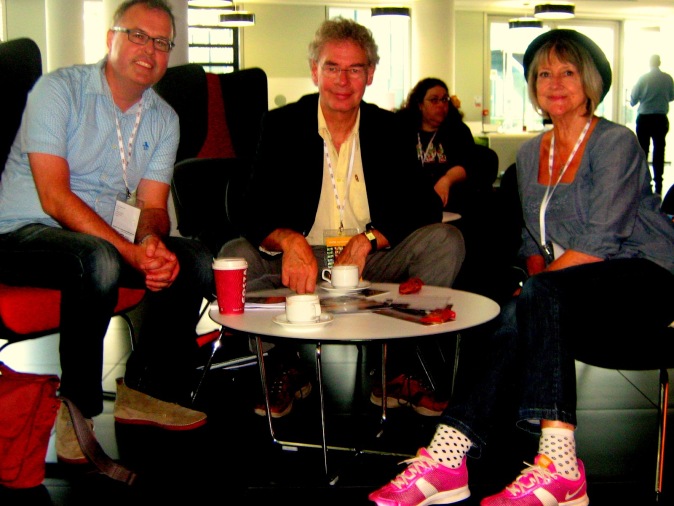 Sheila, with Bill Bruford, with us at the IASPM-UK 2012 conference in the University of Salford